The media seems to think that if Yellen is re-nominated as Fed Chair, stocks will skyrocket … but there’s probably not as much difference between potential Chairs as we think.

During a speech last week, Yellen acknowledged that even a little downturn, which would necessitate a few percentage points of easing under “normal” circumstances, could require additional use of “unconventional” monetary policy.  Obviously, this is true … if your main weapon is to lower rates, and rates are near zero, you have to find another weapon.

“The bottom line is that we must recognize that our unconventional tools might have to be used again. If we are indeed living in a low-neutral-rate world, a significantly less severe economic downturn than the Great Recession might be sufficient to drive short-term interest rates back to their effective lower bound.”

The real question is, what does Chairman Powell or Marsh or Taylor do differently?  While I agree in principal with more hawkish monetary policy, aggressively raising rates can also be potentially damaging.  More importantly, just being hawkish in order to add more monetary policy measures so that you can be adequately dovish when the time comes seems … stupid.

The real differences between Yellen and the boys may simply come down to a matter of degree, as opposed to a fundamental difference in policy.  Let’s look 5 years out.  Say this past year is the baseline: 75 basis points per year, nice forward guidance, balance sheet rolls off little by little, and the “mystery” of no inflation.  Long term rate settles in around 2.75% as the projections indicate.

If one of the other guys gets nominated, you’re looking at how much difference?  If it’s Powell, probably not much.  If it’s Marsh or Taylor, 100 basis points of tightening per year, probably.  One hike every meeting with a press conference.  If they’re interested in being a little less predictable, maybe 125 basis points per year.  Three on press conference days and two without (four and one, maybe)?  If nothing happens in five years, you get to 6.25% – 7.5%.  Those are Fed Fund levels we haven’t seen since the late 80s.  If that’s the case, we will have blown past the current longest expansion in US history (10 years post 1991 recession).

Anyway, below is the current Taylor Rule estimate from Bloomberg. 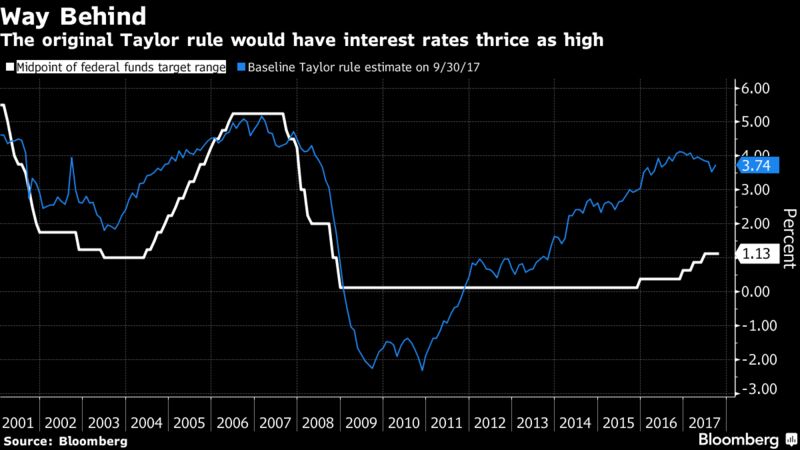 Real GDP in the low to mid 4% doesn’t seem likely.  CPI In the mid to high 4% doesn’t seem right either (or whatever your metric is … all inflation was a lot higher in the late 80s).  And now, we’ve run out of measurable inputs.  Sudden downturn in Potential Output ?  What we have left is the Potential Output, an estimate (“Potential output is the maximum amount of goods and services an economy can turn out when it is most efficient—that is, at full capacity.” – IMF), desired rate of inflation (I guess we all agree that it’s 2%), and the assumed equilibrium real interest rate.  Basically, if you assume that the equilibrium real interest rate is high, you get more hawkishness from the Taylor Rule …

And there you have it, I guess.  There isn’t a ton to recommend rates much higher than the Fed’s current 2.75% long term prediction.  Let’s say we can justify 5% in the medium term (125 basis points or so per year for three years).  Do you start normalizing the balance sheet at a faster rate also?  If you take away QE quickly and bump up rates 400 basis points, I can’t imagine that it has no negative affect.  Seems unlikely, anyway.

That said, I don’t hate that there might be some negative affect.  If stocks and bonds rolled over 15-20% and shook out some of the complacency, that might be great for markets.  If it happens soon enough, it could even end up slightly positive for the nominator in chief: “we had a little mini-recession after I made the Federal Reserve more hawkish, making hard presidential decisions, but the markets are back where they were before I made that choice and the Fed has become better” (if that theoretical sell off takes 2-3 years to materialize, very bad for his prospects).

As I’ve said before, Trump has no incentive to nominate a Fed Chair who’s going to rock the boat.  Whomever he elects will appeal to somebody (either the hawkish base, Taylor or Marsh, or as negotiation ploy with Democrats, “I kept Obama’s gal, work with me”), and the hand wringing of the past couple of months will be forgotten.  Stocks up 10-15 basis points a day with new highs every month until November 2020 lets Trump tout the greatest economic presidency in the history of presidencies, maybe ever.

2 thoughts on “Are the potential nominees that different?”

This year, the Fed announced that it would attempt to normalize their $4+ trillion balance sheet at the maximum rate of $50 million per month.  At that rate, we’ll be back at pre-crisis levels by Mid 2023 … if nothing bad happens.

The Fed is currently projecting the following Fed Funds rates: